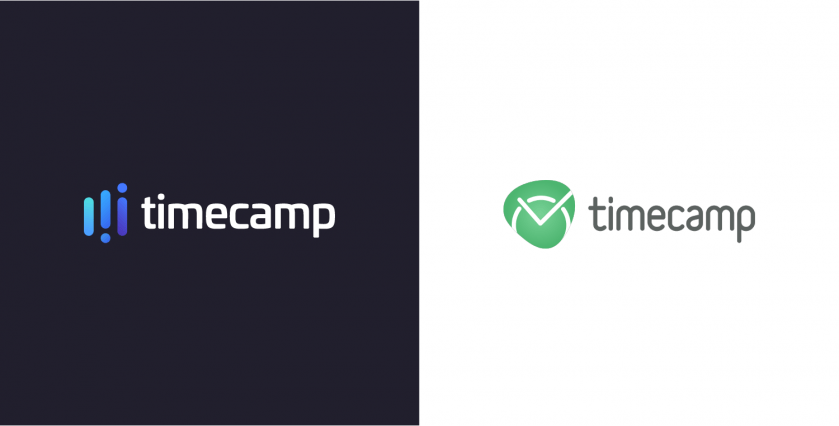 In case you’ve missed it, we announced back a few months ago (wow, I can’t believe it’s been that long!) that we’re working on revamping Timecamp’s brand.

But before we get into the nitty-gritty details of what was in the works, let’s set the stage with a few definitions.

Well, according to Wikipedia, rebranding is:

[…] Rebranding is a marketing strategy in which a new name, term, symbol, design, concept, or combination thereof is created for an established brand with the intention of developing a new, differentiated identity in the minds of consumers, investors, competitors, and other stakeholders.[1] Often, this involves radical changes to a brand’s logo, name, legal names, image, marketing strategy, and advertising themes. Such changes typically aim to reposition the brand/company, occasionally to distance itself from negative connotations of the previous branding, or to move the brand upmarket; they may also communicate a new message […]

Okay, did some of you had a TL;DR moment?

Basically, rebranding is a complete change of a company’s branding which results in portraying a different appearance.

It’s crucial to also point out what rebranding is not:

This means that rebranding requires assessing each touchpoint that recipients have with your brand and subjecting it to a complete change.

Touchpoints are for example a billboard, a YouTube video, an e-mail signature, or a trade show brochure that your sales team was handing out last year.

So as you can imagine, that’s quite a lot of work.

The decision to rebrand Timecamp

Well… doing the work it was supposed to do.

Meaning: communicate what Timecamp is and why you should give it a try.

The previous website did its job well in terms of acquiring new leads and maintaining a steady inflow of traffic, but the general feeling was that we weren’t positioning ourselves in any unique or distinguishable way.

We started tooling with the idea of doing a rebranding, but one thing was apparent that we don’t actually have either the knowledge or skills to make this project happen.

Learning about rebranding from experts

So, we started off by acknowledging that we don’t actually know a lot about branding.

So we decided to find someone who does.

We got in touch with Paul Skah, a renowned Polish brand & startup consultant who, as states on his LinkedIn profile, “helps companies build strong brands”. His resume of working with Orange, Sony, HBO, and other big names did the job in terms of convincing us to get in touch with him.

Paul, not only a great branding mind but also a really cool fella to work with, conducted a day’s worth of a branding workshop during which we dissected the current state of Timecamp’s brand as well as setting up the direction for a complete brand relaunch.

What did we learn?

Here are the most crucial findings that had an enormous impact on our project.

Paul started off by introducing the concept of brand archetypes, most famously introduced a book titled “The Hero and the Outlaw” by Margaret Mark and Carol S. Pearson.

The book outlines how each strong and recognizable brand is rooted in a specific archetype that represents common cultural understandings and perceptions.

According to Mark’s book, there are 12 archetypes, some of which are (and examples of companies that use them):

Interesting fact: brand archetypes can be changed over time (if needed).

Apple as an example of switching brand archetypes

You may ask, why a company shifted its brand to a different archetype? Well, Apple positioned itself as the challenger brand from the 80s up till the early 2000s.

However, after pretty much dominating the world with the launch of the iPhone and other devices, it’s impossible to be the leader and yet, stay a true outlaw.

That’s why post-2007 Apple is leaning towards The Creator archetype.

Just take a look at their keynote events and see how much emphasis is put on showcasing every detail of the new iPad and what sort of groundbreaking technology was used.

So what does an archetype do (or mean)?

A consciously selected archetype allows establishing a unique and coherent communication both visually and text-wise.

Therefore, it helps to create a kind of “communication template” that allows creatives from the marketing and PR departments to use a congruent way of communicating.

And most importantly, when you go about the process quite thoroughly, then it’s really difficult for other companies to mimic your brand.

Contrary to what you might think, it wasn’t that much of a complex process. It all came down to Paul asking us some questions that served as guidelines to determine in which archetype group Timecamp would fit most.

Although they initially might have seemed quite vague, answering them really sped us towards choosing the right brand archetype for Timecamp.

“Do you want to reshape the current landscape, or you’re aiming to maintain the current status quo”?

These questions led us to choose the Outlaw, who seeks to reshape the current landscape by introducing a radical change and isn’t happy with the current status.

And to be fair, it really hit the spot with how we want to view Timecamp in its revamped form.

The process of rebranding

Once we decided on which archetype was the best fit for Timecamp, the adapted framework also required us to establish the following brand elements such as brand icons, brand heroes.

These are the elements that provide a unique perception of a brand identity.

For example, a brand icon for Apple would be its Retina display.

Hint: did you know that those Retina Displays are manufactured by Samsung, right? Basically, Apple decided to use 3rd party parts and call them their own.

Also, another great branding example is Siri, of course besides the fact of Apple acquiring this company back in 2010, it makes a really good example of how distinguishable a name is Siri.

Imagine speaking to your phone:

That’s why creating the right brand icons will get you really far.

The Marlboro Man, Mr. Muscle, The Michelin Man are one the most popular and well-recognized examples of a brand hero, which is a simple and symbolic representation of a brand’s identity (and archetype). Using these characters is a very powerful tool for projecting the right brand message and establishing a recognizable, visual pattern.

However, strong visual brand heroes are a common thing when advertising commodities (let’s just use B2C as a more modern and relevant term), whereas a business-to-business company that usually offers a well thought, value-driven solution doesn’t need to rely on fictional characters in order to differentiate themselves from their competitors.

Next, it’s time to assess all of the current touchpoints that people have with your brand. All the way from a website to a logo in an invoice or an e-mail signature.

Once that is audited, now its time to get busy with redesigning the visual elements as well as providing new copywriting that matches the selected archetype.

What did we learn about rebranding the right way?

There’s no more room for super-technical USP (unique selling point). Especially among today’s tech business, it’s very easy for companies to mimic their competitor’s features. Most of the development teams use the same frameworks and programming languages so a tech-driven differentiator is becoming more and more difficult to have.

You can say anything you want about your brand (as long it’s congruent with your product, service, and organization)

As mentioned above, if you’re part of the tech industry, its quite probable that this one innovative feature or product might be copied within the next quarter or just a couple of development sprints by your competitors.

This, however, creates something that the infamous Don Draper from Mad Men called:

“[…] the greatest advertising opportunity since the invention of cereal.”

Once we established our brand archetype, brand heroes, and brand icons then it was time to implement all those elements into a new logo and most importantly, a new website.

What’s crucial to point that during the redesign of the website is pretty much became not only a branding project but a full-blown multi-department effort.

A new design means a new mockup and concept.

A new mockup means creating one with having a conversion-minded approach.

Not to mention, we still need to maintain our current website’s traffic so had to make sure that our SEO team was also on board with any new designs.

Arriving at the finish line

So, after a couple of months worth of extensive and cross-department teamwork, we’re extremely excited to share the new Timecamp website.

Of course, it’s still a 1.0 version since we’ll be collecting feedback and user data to make further improvements.

If you enjoyed us going into detail about the intricacies related to the art of rebranding then be sure to give your thoughts in the comments.

That’s all for now, over and out!

Try TimeCamp, the time tracking software with insightful reports about your projects performance